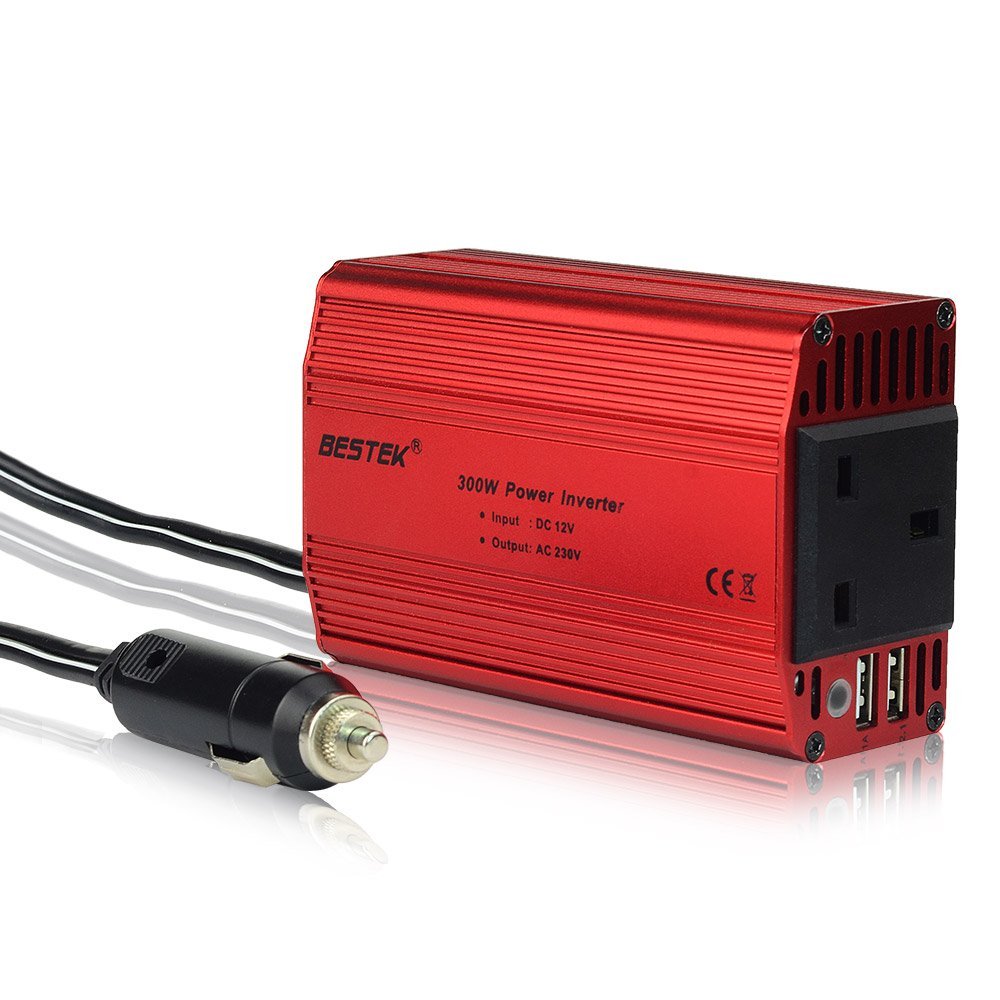 The Bestek 300W car power inverter lets you use appliances that require the standard UK, 3-pin adapter – in your car! The need for charging laptops during road trips, or using other household items whilst on camping trips can easily become a hassle since most commercial cars and vehicles only output 12V through the cigarette lighter found in the dashboard. The Bestek car power inverter does a good job of using this limited power output to create an output port suited to a larger number of uses. The Bestek 300W car power inverter converts 12V DC output from your car to 230V AC output allowing you to power a whole host of electrical items. Not only does it offer it’s output in the form of the UK 3-pin mains socket, but also as two USB ports to charge smaller devices such as digital cameras, smartphones and tablets.

The 3-pin socket provides a 230V AC output whilst the two USB ports provide 2.1A and 1A respectively. The USB 2.1A port is sufficient to charge larger smartphones and tablets at full-speed without an additional adapter, and the 1A port will suffice for almost all other uses.

The Bestek 300W car power inverter would be most suitable for those who need to charge their laptops on the move using a quick and budget solution with minimal fuss. It also provides the user with additional USB ports to charge other items too – which is a huge bonus as the device will use the only power outlet in a vehicle.

Though Bestek is a relatively unknown brand in the UK market, the quality of car power inverter feels second to none. The metallic red shell is solid and robust and definitely feels like it will protect the internal circuitry from knocks and bumps. It’s also fairly light too, considering it contains a full DC-to-AC inverter which usually weigh more than a brick! Some users have complained that the inverter has stopped working for them. During my testing, my unit had no issues charging my Apple MacBook Pro 2011 or my iPhone 5S via the USB port. The unit does become very warm after approximately thirty minutes of use, which for some users seems to be a cause for concern, but the manufacturer has explicitly stated that this is expected.

There are not too many alternatives currently on the market within the same budget, price range. I would therefore strongly recommend this to anyone looking for a quick solution to a UK output socket whilst on the move.