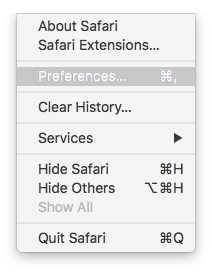 Apple Mac and iOS users around the world experienced a Safari new tab address bar glitch this Wednesday. Though the issue has not yet been officially acknowledged by Apple, news outlets such as Sky News and The Guardian have reported that a fix may already be on the way.

The reason behind the Safari new tab address bar glitch is still unknown, and will remain to be so until Apple acknowledge the bug. It hasn’t seemed to affect all devices, but million of Apple users across the world have reported their problems via social networks and Reddit.

Thankfully, there is a simple fix.

The issue is caused by a background update of Safari suggestions. A temporary resolution to the issue, while Apple deals with it, is to disable Safari’s search suggestions from your browser’s settings. Alternatively, you could just download Google Chrome which is a far better web browser.

Step 1: Launch the Safari web browser and then click Safari from the toolbar at the top of your screen. In the menu that appears, select Preferences. Step 2: In the window that appears, click on to the Search tab and then ensure the box for ‘Safari Suggestions’ is un-ticked.

Once Apple has released a fix to the underlying issue, you can return to Safari’s settings an re-enable Safari Suggestions.

Steps to resolve the issue on iOS devices may vary slightly, however the general procedure is the same.

Step 2: Scroll to Safari and touch on to it to open it’s settings panel.

Once Apple has released a fix to the underlying issue, you can return to Safari’s settings an re-enable Safari Suggestions.