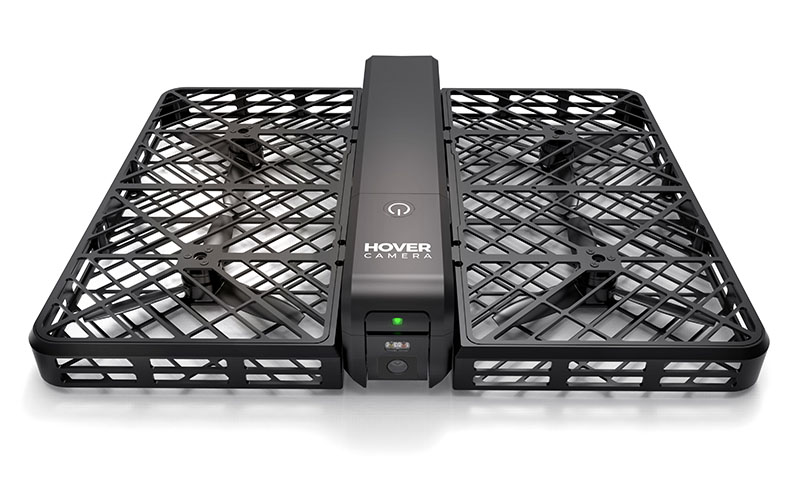 The new Hover Camera Drone by Zero Zero is set to be a super-portable ariel camera that automatically follows the user. Autopilot is an up-and-coming feature on high-end consumer drones. It allows your small ariel drone (usually mounted with a camera) to follow a target automatically without any further user input. “Follow Me” or Autopilot requires Artificial Intelligence (AI) and Digital Image Processing (DIP) groundwork to be put in place to work. Both fields of engineering have existed for a long time, however the combination of both – especially for drones – is a largely unexplored niche.

The Hover Camera Drone is a foldable drone weighing just 238 grams which features a superb 13MP camera capable of 4K video recording. As the name suggests, this gadget is mainly for ariel photography and videography – specifically for a target user (think weddings!).

It’s robust construction encloses the drone’s high-speed propellor within a carbon fibre frame which makes it super safe in all environments meaning you can fly it closely to crowds and even grab it out of the air once you have finished recording!

Given it’s weight, there is no need to register it under any of the world’s aviation authorities. It is just under the 250 gram restriction set by the FAA in the United States.

Zero Zero claim that the entire device has been designed, built and constructed from the ground up. Even the brushless motors used for the propellers are designed and manufactured for this specific purpose. This has allowed the Hover Camera Drone to be super-lightweight, efficient and portable.

Furthermore, the AI algorithm used to follow the target has been designed from the ground up, rather than relying on existing work already published. It uses the Qualcomm Snapdragon Flight platform which runs at full speed throughout the duration of the flight. Despite this, the efficient design dynamics of the Hover Camera Drone allow it to use downward airflow to cool the always-on chipset; and a single charge will lat for about eight minutes.

The hardware design, the size of a VHS cassette when folded, allows you to quickly and easily remove the battery on-the-go.

CEO of Zero Zero, MQ Wang is not worried about this product being copied. He says:

“It’s a lot harder to build things of this size versus bigger things. Something of this size needs to be built from the ground up … We use a completely proprietary algorithm, as we are squeezing every single drop of juice out of the Snapdragon 801; and we don’t use open source code because it’s not good enough”

The Hover Camera Drone comes with a 13-megapixel camera which can take stills as well as 4K video. The drone also has a built-in dual-tone flash similar to the iPhone which can help balance the colours in low-light situations. Since the camera operates on a single-axis gimbal, the Hover Camera Drone has to use electronic image stabilisation which naturally would have some drawbacks – including reduced image and video quality. In addition to the primary camera, there is a downward-facing 3MP lens alongside a sonar which is used to help stabilise the drone during flight. The CEO of Zero Zero has said that users can expect a similar level of image quality as most high-end smartphones.

Though the focus is on autonomous photography and videography, the smart phone app does allow you to control:

For quality purposes, the smart phone application using the high-speed Wi-Fi connection for a live video stream, and download a 720p copy of the video from the drone’s built-in 32GB of storage. You can connect to the drone via USB to transfer the original photo and video files.

Currently, the smart phone application offer 360 panoramic mode with face tracking and body tracking. Though this has not been perfected just yet, the manufactures have promised that bugs will be smoothed out in time for release. In addition, they have vowed to add more image-based features such as gesture control and orbiting mode.

Zero Zero are yet to show an official launch date for the Hover Camera Drone. They have aimed to retail the device just under $600 (£400) which makes it fairly reasonable given the prices of existing drones on the market. Furthermore, the suitability of this drone for amateur and freelance video and photography work make the sub-£500 price very appealing.

The beta trial is now open and users are encouraged to sign up for updates. We have requested a review sample of the drone from Zero Zero and will publish our full hands-on if our request is granted.